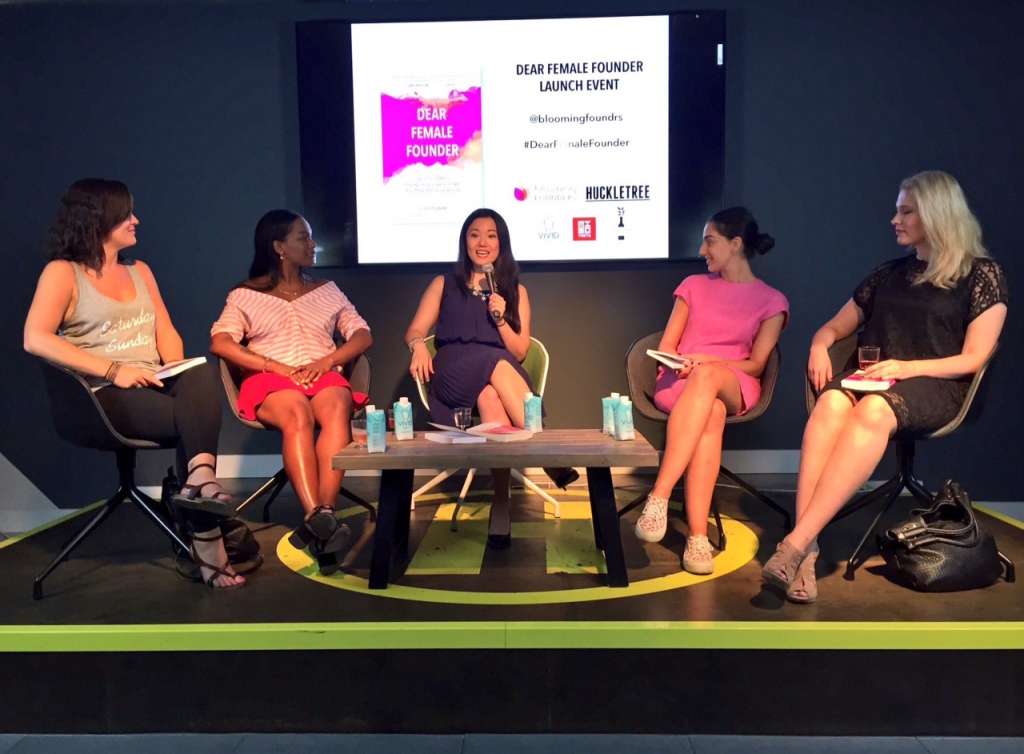 There is a visible shortage of female entrepreneurs to act as role models for future founders. This is one of the key things that holds women back in the workplace. How can we, as women, be inspired to start our own business when most start-ups aspire to the success of Steve Jobs, Richard Branson and Mark Zuckerberg? There’s nothing wrong with them, they are accomplished role models; however, if there is going to be a change in the status quo, there needs to be opportunities for women to follow in the footsteps of other women. That journey starts by knowing that it’s possible.

Lu Li, the creator of Blooming Founders, is filling that gap in the market.

“You can’t be what you can’t see,” Lu evangelizes, as she shares her experience of learning business lessons the hard way. Those fortunate enough to be part of the exclusive London launch of her book, Dear Female Founder, would walk away with 66 pieces of impactful advice in the form of letters from new female mentors; housed in a signed copy. Five of the women featured hold MBE and OBE titles. Truly inspiring. The project took 9 months from conception to publication and was born out of a successful crowdfunding exercise. It enabled Lu to connect with female entrepreneurs and learn from their success stories. It’s a valuable resource to many, including Sarah Wood OBE, co-founder of Unruly: “I wish this book had existed when I started my own entrepreneurial journey – it would have saved me a lot of time and heartache.”

Within the pages, the female entrepreneurs, boasting a combined revenue of $1 billion, share their advice and wisdom. “Act like a global CEO from Day 1,” says Sharmadean Reid, founder of WAH London, she then adds, “surround yourself with as many people as possible who know more than you do.”

Starting a business is all about collaboration; working with others that are skilled in areas that you may not be, will only help to support your business growth. Ultimately, you will benefit if you have like minded people around you, so find a co-founder that complements you and collaborate.

Lu frames her book by discussing the power of collaboration and the ability that it has to create a movement. “I didn’t know 70% of the women featured in the book before the project began,” says Lu. It clearly articulates the “power of women supporting women.” The contributions are global featuring letters from Jordan, NYC, New Zealand, Argentina and London, to name a few. The youngest founder is 24 and the oldest 50, which shows, as Lu says, “it’s never too late to start.”

Positive affirmations such as these are exactly what the book embodies. Telling yourself “I am the shit,” everyday can only support you on your journey, professes Alex Depledge, co-founder of Hassle.com. In her opinion, “female confidence is the biggest inhibitor of progression.” We live in a world where life is not like Instagram, even though everyone is pretending that it is by promoting their curated self image to society. So, ‘lean in’ and pursue the idea that has been in the back of your mind. Often the most difficult thing to do is to start.

As a collection, the book is an impactful resource for future generations. By asking these women to write a letter featuring the advice that they want to pass on, Lu has introduced women to new personal mentors. In turn they have advised her on her own business journey.

Irra Ariella Khi, co-founder of Vchain Technology, is one of these mentors. Acknowledged as a champion of the book itself, Lu and Irra connected after a chance phone call in an airport as Irra was waiting to collect her luggage. Support can be found anywhere – you just have to be open to conversation. “What would you do if you were not afraid?” asks Irra in her letter. Courage is the only thing standing between you and your goals.

Sometimes you have to ask for support in order to progress. When Lu voiced her idea to Irra that day on the phone – something along the lines of “Hi I’m Lu, I have this idea for a book…what do you think?” – it was asked boldly and fearlessly to a stranger. An open conversation. A request for insight.

Looking around at a captive audience of women that are so obviously inspired is inspiring. Lu’s book launch brought them all together. The venue? Huckletree – the business venture of Gabriela Hersham, who provides collaborative co-working offices for ambitious people to make things happen. “Always hang out with people who are smarter than you. Osmosis works,” says Gabriela, backing the concept of her own initiative.

Are you starting to see the trend here? Knowledge sharing, confidence, positive self talk, collaboration and support. These are the core words that exude from the 66 letters of advice. They flow in three parts, categorized by stories that focus on how to “start,” “learn” and “reflect.”

Dear future founder: there is something for everyone at every stage of their business journey in this book. Male or female founder, you need to read it. It is now climbing the entrepreneurial book ranking on Amazon – you can buy it here.

To hear her story, Lu Li has recently featured on a podcast by GeekGirl Meet Up and gained positive recognition on Forbes.