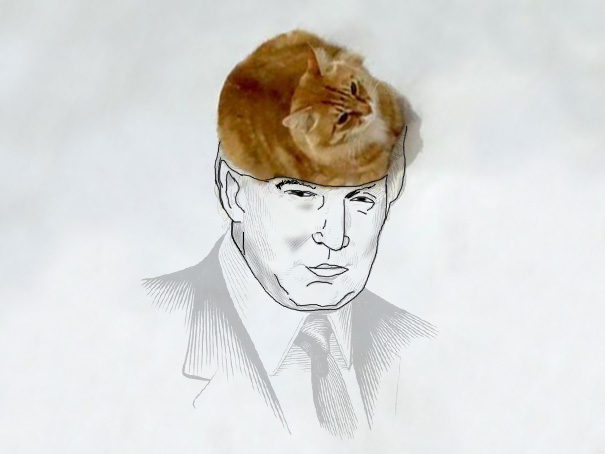 With the National Conventions for both parties completed and the election season heating up, there are many concerns with the Republican candidate: Donald Trump. There is no way you have escaped hearing about him and his antics throughout his campaign. As a candidate, he is emotional, childish, and immature. Here are 20 times that Donald Trump has been a little bitch.

1 | When he inspired an ignorant following of racists and sexists.

It’s no secret that Donald Trump is known for his racist attitude. With his constant mantra of “build a wall.” Trump supporters are well-known for their sexist and racial remarks, along with their threats of violence. But I guess when someone has been a documented racist for over forty years, they, unfortunately, are only able to attract likeminded followers.

2 | When He Got Upset About His Tiny Hands.

From the start of the election process, when many men were fighting for the coveted role of the Republican nominee, Donald made a point of making fun of everyone. Marco Rubio, deemed “Little Marco” by Trump, finally struck back. Rubio brought attention to Donald’s tiny hands, suggesting that something else might be small as well and Trump just wouldn’t let that go. “He said I have small hands. But I’ve always heard people say, ‘Donald, you have the most beautiful hands,'” Donald argued. Seriously? Couldn’t he just let it go? By now, we all probably would have forgotten about it, but instead, the entire country gets to continue to think about how small Donald’s “hands” are.

3 | When he insulted prisoners of war.

Trump has insulted just about every type of person you can imagine. This includes fellow Republican and decorated Vietnam War veteran, John McCain. Donald declared that people considered McCain a hero only because he was a prisoner of war. “I like people that weren’t captured,” he decided. This wasn’t just an attack on McCain, this was an attack on every POW as well as anyone who has served in the US Military.

4 | When he didn’t release his tax returns.

5 | When he mocked a disabled reporter.

Serge Kovaleski, a New York Times reporter with a muscular disorder, was mocked by presidential candidate Donald Trump. Someone who wants to be in charge of our country, made fun of a man just because of a condition he has no control over. Donald, seriously? Were you bullied in high school and now you just have to pick on anyone you can?

6 | When he was too scared to attend a debate.

Presidential coward, I mean, nominee, Trump refused to attend a debate when he found out the Fox News anchor Megyn Kelly would be one of the moderators. I understand this though; I don’t want to deal with people who are mean to me either. But there’s one big different between me and Donald: only one of us wants to be the president. When I first heard about him refusing to attend the debate, all I wondered was: what if one of our enemies wanted to speak to Donald? Would he attend? Or would he refuse to go because they made fun if his spray tan?

Trump refused to condemn the former grand wizard of the Ku Klux Klan, David Duke, claiming to not know who he was. Duke has vocally supported Trump’s campaign, clearly showing the kind of followers this presidential candidate draws. The fact that Donald wouldn’t distance himself from a well known white supremacist is alarming. It shows that he is comfortable accepting the support of a racist.

8 | When he was labeled as White ISIS.

The Daily Show’s senior political correspondent, Hasan Minhaj, helped me realize just how much of a threat Donald Trump is: he is not only a little bitch, he is White ISIS. Donald Trump is “an extremist leader who came out of nowhere, he’s self-finance, recruits through social media, attracts his followers with a radical ideology to take over the world, and is actively trying to promote a war between Islam and the West.” Yikes.

9 | When he admired Vladimir Putin.

Not only does Donald Trump attract the attention of white supremacists, he also has gained the support of Russian president, Vladimir Putin. The Russian leader has even endorsed Trump to be the next president. Unlike with the KKK, however, Trump has openly showed his respect for Putin for the last nine years. He has been very welcoming of Putin’s attention. Russia is not our friend. American voters should be afraid.

10 | When he got in a fight with the family of a fallen soldier.

For days after the Democratic National Convention, it seems that the only thing people could talk about was the battle between Donald Trump and the Khan family. Khizr Khan spoke at the DNC with his wife by his side. Khan spoke of his fallen son, Army Captain Humayun Khan, and invited Trump to borrow his copy of the Constitution in response to the candidate’s immigration policies. Instead of accepting the pain a family feels when they lose their child, Trump respond by saying, “I’d like to hear his wife say something. She probably, maybe she wasn’t allowed to have anything to say.” Or, more realistically, she didn’t speak because it hurt too much. But don’t worry, Donald is in luck. He wanted to hear her, so she wrote The Washington Post just for him.

11 | When he said women should switch jobs if they are sexually harassed.

In light of the sexual harassment charges brought up against former Fox chief, Roger Ailes, Donald Trump has spoken up about sexual harassment in the work place. But of course, he speaks up in his typical Donald fashion: the presidential candidate says that it is “very sad” that these women are “complaining.” When asked what if his daughter Ivanka were sexually harassed, he responded: “I would like to think she would find another career or find another company if that was the case.” Because clearly, it should be the woman’s responsibility to just leave, instead of the company’s to prevent harassment.

12 | When he didn’t endorse his own party members.

While he finally endorsed Paul Ryan and John McCain, Donald Trump spent some time refusing to support his fellow republicans. The reason? He just “wasn’t quite there yet.” Many people heard that and thought they were having déjà vu. This sounded so familiar because it was exactly what Ryan said a few months ago when asked about why he hadn’t endorsed Trump yet. This is just another example of Donald being a petty and vindictive little bitch.

According to MSNBC, several months ago, Donald Trump met with an international foreign policy expert. In that meeting, he asked about the use of nuclear weapons. Not once, not twice, but three times. “Three times he asked, at one point, if we have them, why can’t we use them? That’s one of the reasons he just doesn’t have foreign policy experts around him. Three times, in an hour briefing, why can’t we use nuclear weapons.” That. Is. Terrifying.

14 | When he didn’t include a way to stop recurring political contributions to his campaign.

I wish that was a joke. It’s true; there is currently no clear way to remove your credit card information form their website or cancel a recurring payment. Clearly, the billionaire business mogul knows how to make money: by ripping off every single person that he can.

15 | When he had one of the worst Republican National Conventions ever.

With the insanity of the first day of the convention, it was clear that the RNC wasn’t going to be great. Politico Magazine decided to take a look at the convention to see just how bad it was. From the “delegate walk-outs, floor chants, and a plagiarism controversy on Monday, to a conspicuous non-endorsement on Wednesday to a leaked speech on Thursday,” the magazine decided that this was definitely one of the worst conventions in history.

16 | When he reacted to the Democratic National Convention.

That’s right. A baby was thrown out of a rally. But not only did Donald Trump throw out his supporters, he tricked them into feeling like everything was alright, telling them: “Don’t worry, don’t worry. The mom’s running around like, don’t worry about it.” But then, “Actually I was only kidding, you can get that baby out of here. I think she really believed me that I love having a baby crying while I’m speaking.” Donald not only humiliated one of his supporters, he thought it was funny that she believed something he said. How ridiculous of her to trust her presidential candidate.

By now, we’ve all seen them: the cute little girls in their red, white, and blue sparkly costumes singing at a Donald Trump rally. It was adorable and annoyingly catchy. Well, to no one’s surprise, Trump screwed them over and now they are planning to sue his campaign. The father of the smallest Freedom Kid, Jeff Popick, told The Washington Post that when the girls agreed to perform that “he asked for $2,500 in payment for the second performance, in Pensacola. The campaign made a counter-offer: How about a table where the group could presell albums? Popick took the deal. When they arrived at the venue, though, there was no table.” No table and no payment for three adorable little girls that helped the Trump campaign. What kind of monster doesn’t pay little girls that are helping to spread propaganda?

19 | When he suggested that “Second Amendment people” should harm Hillary Clinton.

Donald Trump has said a lot of stupid, insensitive, just plain idiotic things since he decided to run for president, but this one might take the cake. Recently, he said, “Hillary wants to abolish – essentially abolish the Second Amendment. By the way, if she gets to pick, if she gets to pick her judges, nothing you can do, folks. Although the Second Amendment people, maybe there is, I don’t know.” There aren’t many ways you can interpret that other than saying that gun enthusiasts might be able to do something about Hillary by attacking her. Trump’s senior communications advisor, Jason Miller, claims that the comment was made about how strong of a voting force gun-supporters are; however, that’s not how a lot of people understood it.

This whole campaign has been a mess. Even now, Trump’s staff is “suicidal.” Donald Trump is no more than a weak little man that makes himself seem strong by playing on the fears and concerns of ignorant people. Donald is a celebrity who needed more attention. A small-handed coward who wanted to be heard. A little bitch who, if elected, will destroy our country. Taking us back 60 years to when women were stuck in the kitchen, minorities were ushered into separate schools, and hatred and fear were rampant, is not the way to make America great again.