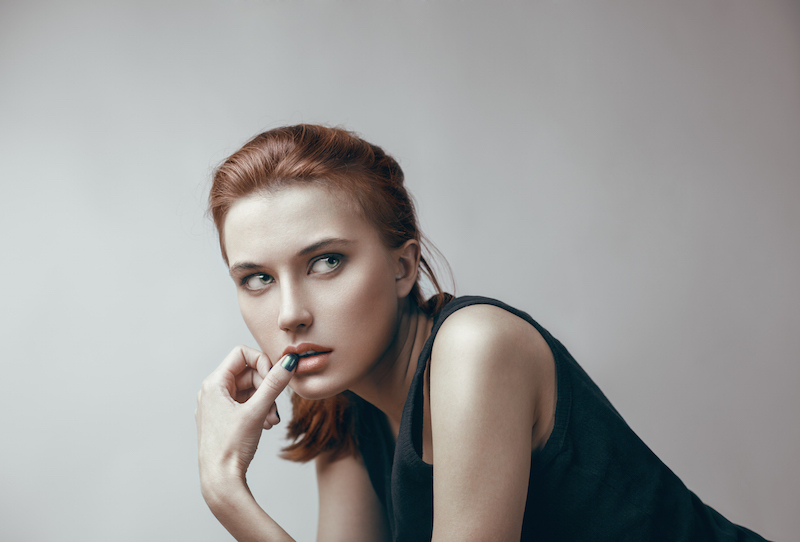 For me, it’s an almost sick-to-my-stomach feeling; the kind that tells me that no matter what I do, no matter how well I do, it will never be enough. As Ben Folds so succinctly put it in one of his songs: “There’s always someone cooler than you.”

When is the most recent time you’ve felt envy?

An easy way to find that moment is by asking yourself who or what you most recently compared yourself to. Who did you judge yourself as being “less” than? Did it give you recognizable physical sensations in your body? Was there any self-talk that went along with it? What was the source of the envy?

Recently, I read an opinion piece by author Jennifer Weiner in The New York Times, in which she skillfully and honestly grapples with her feelings of inadequacy when comparing her writing—often dismissed as ‘chick lit’—to that of her esteemed literary Princeton professors and fellow Ivy League alumni. In it, she comes to a startling conclusion: “I’ve spent 15 years insisting that books like mine deserve a place on the shelf, and maybe I don’t entirely believe it myself.”

That statement was an “aha” moment for me. In my tarot practice, I teach others how to use the powerful symbolism of the cards to grow in their own personal power. I’ve also written a bit about the debilitating effects of negative comparisons to others. It’s something I struggle with often. The idea that envy and insecurity, two emotions I feel shameful about having but have trouble repressing, might be pinpointing the very areas in my life where I need to step up and claim my own worth was revolutionary.

There’s something we deserve that we aren’t claiming.

The heart of that statement turns envy on its head. Instead of looking outside at the “other” and telling ourselves that we’ll never be good enough, we are called upon to take personal responsibility for what we desire, what we deserve, and to stand up and claim it as our own.

But in order to do something so bold, we have to get past the comparing, past the “not good enough” mentality. The envy and insecurity serve a purpose: they delay our taking responsibility. They put off the often scary step of boldly saying: “Yes. I, too, deserve this, and now I will embrace it and own it.”

Bruce Tift, author of Already Free: Buddhism Meets Psychotherapy on the Path to Liberation, suggests that the solution lies in what I’ll call a sort of radical self-acceptance. In his work, he advocates dropping aggression towards ourselves and reigning in the idea that we need fixing or aren’t good enough already in order to stop keeping our lives “at arm’s length.” He gives his clients a homework assignment in which, for about a month or so, they “drop any claim that there’s something wrong.” Initially an unthinkable task, it becomes a practice within which clients experience surprising results.

To introduce you to the idea of using randomly-chosen symbolic images to support our work in this self-love, I’d like to draw a card from my deck of 78 stories and use it as a message for reflection.

How we can transform envy into the seed for radical self-acceptance?

The card that emerged from the 78 possibilities is The Star. 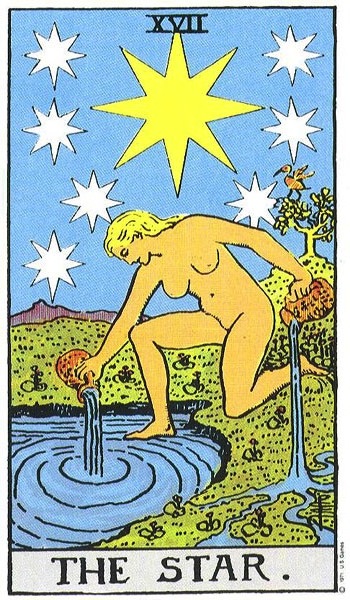 In this image, we see a woman without any clothes on, which immediately tells us something important: vulnerability is key. We must shed our masks. The “clothes” we wear cover up who we really are; we may feel protected somehow from the threats of criticism, ridicule, and shame, but we aren’t practicing self-acceptance.

Secondly, we see the woman pouring water from two vessels: one into a pool of water at her feet and another onto the ground. We must nurture both our inner, spiritual, emotional, and intuitive side (feeding that pool of water) as well as the grounded, rational, practical, and everyday side we show to the world (watering the ground to make things grow). In short: we need balance.

The Star is ultimately about hope, but also trust. It’s about a faith in the fact that we are safe in the Universe just as we are and just as we came into this world, and that we already have the resources we need make a vital contribution to our particular surroundings.

You may have even noticed a small bird perched on a tree in the background. When we fully expose ourselves, offering the world what we have to give, we are creating fertile ground for taking flight.