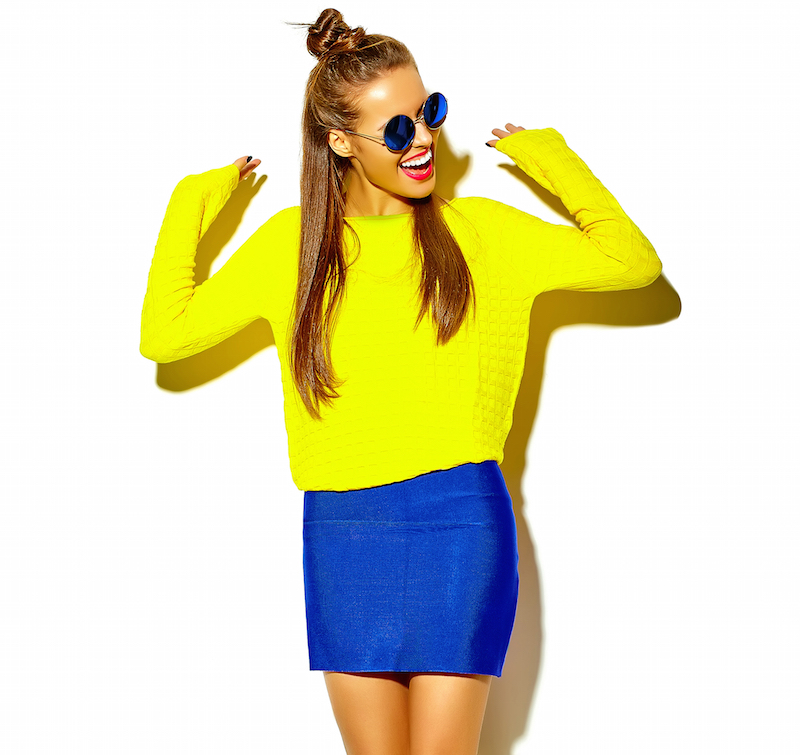 My mom had a phrase she’d always say when I was nervous about trying something new. She’d tell me: “Fake it ‘til you make it.” I thought it was corny, ridiculous, and that it didn’t do anything to take away the anxiety that would inevitably paralyze me before I’d have to do whatever it was that was terrifying me, but now, at nearly age 40, I fully embrace the sheer wisdom of that simple phrase. The truth of the matter is that most of the time we have to jump into the void before we know that we’ll make it out intact.

Here are three ways you can put these strategies to work in your life. Starting right now, you can get closer to the fearlessness that will push you towards your most badass life.

For many of us this advice seems counterintuitive, because we’ve been taught to go after and try things only once we feel sure that we’re fully prepared, once we know that we will succeed.

I landed my first job in Rome by responding to a classified ad from a school looking for teachers of English as a Second Language. I went in for an interview on a Friday, and they offered me the job at the end of the interview. There was only one catch: I had to make a decision right there on the spot, because the job was starting on Monday. One of their teachers had quit unexpectedly, leaving the school with three courses without teachers, so they needed an answer.

I blinked, took a deep breath, and said: “OK.” They happily loaded me down with textbooks, teacher’s books, cassette tapes (cassette tapes!), and class rosters. I was definitely in way over my head.

That weekend, I panicked. I felt unprepared, despite the two-month intensive course I had completed to earn my Cambridge Certificate to teach English as a second language (CELTA). On paper, I was qualified. I’d done practice teaching in a classroom setting with actual students.

But this was the first time I’d ever be doing anything like this, the first time someone would pay me for it, the first time I’d be counted on to do it “the right way,” and it seemed impossible. I had so many fears and worries about all the things that could go wrong. But I pushed, and anguished, my way through all of that. My desire to achieve my dream of creating a financially sustainable life in Rome was more powerful than my temporary fear of not being good enough.

As it turned out, those first three courses ended up being some of the most memorable of my entire career teaching English, with students that I remember to this day.

Sometimes—most times—when it comes to going boldly forth in pursuit of your dreams, you must take leaps of faith before you feel completely prepared. Keep in mind the larger picture that this experience is helping you to create, and focus on that.

The next time you’re offered a project, assignment, proposal, or opportunity to do something that makes you feel nervous, not fully prepared, or at risk for failure, fearlessly dive in and say “YES!” even if your insides are screaming “No, I’m not ready yet!”

What’s the worst that could happen? Like my mom said, “Fake it ‘til you make it.” You’re likely much more qualified and ready than you think. And there’s only one first time for everything; each time after that will be easier.

2 | Remember that perfect is impossible, so don’t let perfectionism hold you back.

There’s a phrase attributed to Voltaire: “Don’t let the perfect be the enemy of the good.”

High achievers are usually also perfectionists, but the bottom line is that nothing is perfect, nor can anything ever be perfect. When you set out to achieve your goals fearlessly, you’ll shoot yourself in the foot if you’re only willing to accept perfection.

You may not even be aware that you’re striving for unattainable perfection. Sometimes procrastination  is perfectionism in disguise (like the example in the first tip—saying “no” because you don’t feel 100% ready yet). Don’t put off taking action until things are “perfect” in the way that you’ve envisioned them, because that’s impossible and virtually guarantees that you’ll never start.

Writer Anne Lamott knows about this. She wholeheartedly espouses the idea of the “shitty first draft” in her book Bird by Bird. “All good writers write them. This is how they end up with good second drafts and terrific third drafts.”

When I was learning to speak Italian, if I had let perfectionism rule me (and I certainly could have, because I am a recovering perfectionist), I never would have spoken a word. Lucky for me I had to eat, I had to find my way around the city, I had to interact, and thus, I had to get over my fear of not saying things perfectly the first time. Every sentence that came out of my mouth was a spoken form of the “shitty first draft.” My Italian wasn’t even close to good in the beginning. But it got better. And by continually making mistakes and not letting the illusion of the perfect be the enemy of the good, I now speak the language so well that Italians have told me I speak better than many Italians—and with a Roman inflection, no less.

Don’t let the perfect be the enemy of the good. You are good enough, right now, just as you are. And this isn’t empty motivational speech, it’s fact. Keep going.

Many of us live in our heads. We mull over ideas, we switch from one inspiration to the next, we ponder, we make to-do lists, we sketch out pros and cons, we float ideas by our friends and family for feedback. We do a lot of thinking about trying. But the bottom line is that real progress, and the real changes that result from it, are achieved only once we’ve taken that proverbial leap and come out on the other side.

The “other side” is where we have one more experience under our belt, one more fear bravely faced, and one more time when we can say, “well, what do you know? It wasn’t so bad after all!” And in fact, chances are nearly certain that once you’ve come out on the other side, you’ll find that you’ve strengthened those leaping muscles to the point where you’ll be ready to take on something even bigger and even riskier next time. Your so-called comfort zone just got larger.

They say that practice makes perfect, but the truth is this: practice makes progress. Progress makes change. You’ll never go back to being the person you were before you took on the challenges you thought you couldn’t take on.

When I was 28, I was promoted to become the Rome center director of the study abroad company I worked for, which had centers in five major European cities. I had the wonderful but pressure-laden honor of being the youngest director in my company’s history. In addition to doing some heavy-duty “fake it ‘til you make it” (I began wearing business suits, lest people think that I, too, was a college student) and believing in some serious good enough mojo to tame the perfectionism monster, I was forced to stop thinking about trying and just get on with it. After a few times of leading orientations in front of hundreds of students, having to conduct tough disciplinary talks, and reviewing million-euro budgets, I realized I wasn’t faking it anymore—I was living it. Fearless is as fearless does.