For those who don’t know the work of Robert Wilson, he’s a formidable artist and director known for creating epic stage pictures with minimal settings. He doesn’t clutter the stage with objects or scenery; rather, he uses levels, lines, people, and the air between them to form an austere and powerful setting. I’ve had the pleasure of seeing a few Robert Wilson directed pieces, namely Einsetin on the Beach and Threepenny Opera, so I was excited to witness the collaboration between Mr. Wilson and an equally formidable brand: Hermès. 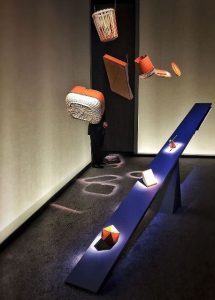 The marriage of the two is succinct, and well matched. An artist that values a minimal, uncluttered image featuring slow movement, and a brand that above all else values the artisan, the top quality, and the hand crafted. That match is well seen in their recent event “Here Elsewhere.” 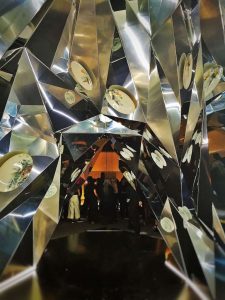 When the visitor first walks through a faceted portal containing impossibly placed Hermès china. It’s the introduction to the slight unbalance that follows. The visitors find themselves in a gallery. In the central area are three vignettes, around the outside ring another eight. Each vignette features items from the Hermès home collection, beautifully lit, in a state of frozen motion. It’s like you’re Alice in a trip down a very expensive rabbit hole. At four of the vignettes, the scene is enhanced with a performer, moving slowly and deliberately, Wilson’s signature style. 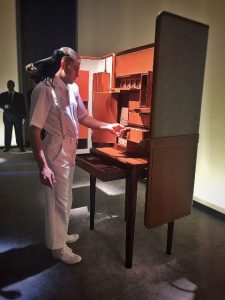 The treatment and often suspension of the objects gives them a reverence that elevates the table or the humble waste basket into something other. A being that takes flight. I must say my favorite was at center in the room, featuring a sofa, suspended at a slight angle (perhaps you could even still sit on it), with a woman lying in front of the sofa, on the floor, in a dress surrounded with feathers. Despite barely moving and not making any eye contact, her performance was incredibly engaging. I later learned that this performer is Meg Harper, a long time collaborator of Wilson’s. This comes as no surprise given her commitment to stillness.

The second room, which you are ushered into by a man wearing a pig-face, is the performance where in two dancers, one at a time, move slowly through choreography while surrounded by 360 video of Hermès objects, patterns and inspiration.

Overall, the evening was like stepping into a magazine ad. A moment that seems to be captured in time, but in reality, you can move through it and walk around. It seems appropriate in this age of social media branding power, that a top level brand would essentially stage a photo-shoot, sans photographer, and then invite its biggest fans to show up, take pictures, and spread the word. It’s simultaneously a statement of exclusivity and accessibility. Anyone can take the shot, as long as you have an invite.

Previous Post
Uber and Lyft Leave Austin, TX After The Failure Of Proposition 1
Next Post
Four Badass Soups To Try This Spring