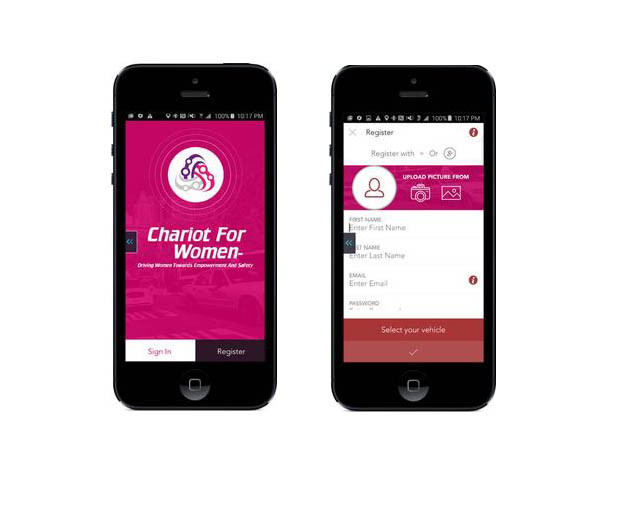 Photo courtesy of Chariot for Women.

I think it is safe to say that most city dwellers appreciate the convenience of apps like Uber and Lyft–especially late into the evening. Personally, anytime I don’t have to walk all the way across Manhattan, take the subway after dark, or fumble to get my wallet out at the end the ride, I’m happy. But when you’re going home alone at 3:00AM, things can get a little tricky.

As a woman, how safe do you feel driving home alone (and sometimes intoxicated) with a stranger?

This is something former Uber driver, Michael Pelletz, started to consider after a half-conscious passenger began aggressively fumbling around with something in his pocket. Alarmed, the former driver realized how dangerous it can be to get in a car with a stranger. Thankfully, no one was hurt and Pelletz was able to stop a nearby police officer to get help, but it left him concerned for other drivers and passengers, women in particular. This inspired the launch of a new ridesharing service with a unique spin: the drivers and passengers will be only female. Chariot for Women will officially launch in Boston on April 19.

There’s no denying some will take issue with the service (the insinuation that only men are dangerous is a definite hot topic), but Pelletz is excited for this opportunity. “We look forward to legal challenges. We want to show there’s inequality in safety in our industry. We hope to go to the U.S. Supreme Court to say that if there’s safety involved, there’s nothing wrong with providing a service for women,” Pelletz told Tech Crunch in a phone interview. The safety issues that Pelletz is talking about can be seen clearly in Buzzfeed’s reveal of Uber’s support tickets referencing sexual assault. Over 6,000 claims were submitted and this month the company agreed to pay up to $25M to California customers who were mislead in regards to safety.

Chariot for Women is similar to other services, but with an emphasis on safety. All drivers are given a background check through Safer Places and are required to pass a Massachusetts’ Criminal Offender Record Information (CORI). When you request a ride from one of these safe drivers, you’ll get more than just a photo of the car and driver: the app provides both the driver and the client with a “safe word.” Once the vehicle arrives, you make sure that the driver’s word matches your own. No more approaching random cars or crossing your fingers that you’re getting into the right one.

The women we spoke to are on board with the service and excited to use it. “Though it might seem sexist, it’s realistic. The fact of the matter is that many women have dealt with unwanted attention and aggression from men. Also, men are usually stronger than women so if one attacks me or gets aggressive with me, I am going to feel more threatened than if the roles were reversed,” says Megan, 36. Though we understand the opposition, we love the concept of safety first driving services as well as the company focus on helping others: the company donates 2% of every fare to charity’s chosen by passengers and will also pick up kids of any gender under age of 13 with no surcharges.

Would an all-female ride-hailing service make you feel safer than another app?