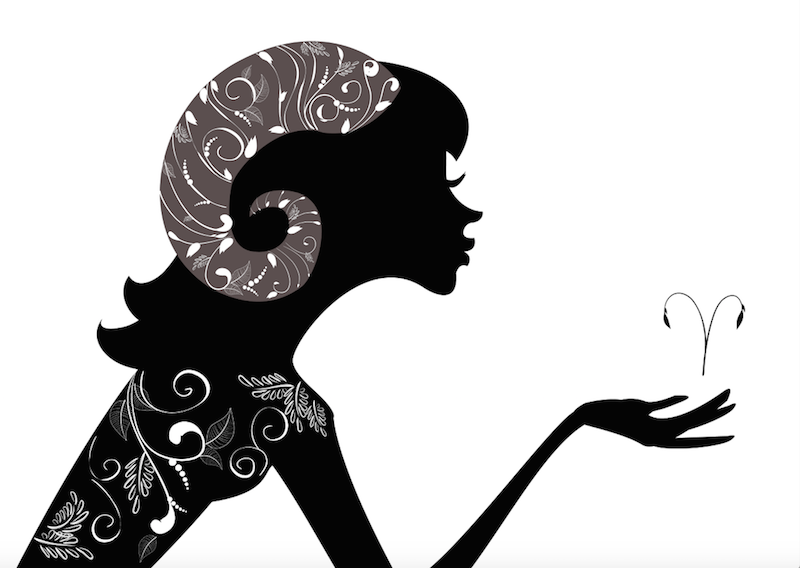 Well, you have gone and found yourself an independent, bold, slightly-self-centered-yet-oh-so-generous Aries female, have you? Though, more likely than not, she found you. Before you pass go and collect your $200.00, know this: She’s already passed it twice and will be annoyed it took you so long to catch up while also gloating that she beat you. Still interested? Read on for 20 other traits to know before dating a Ram.

1 | Don’t Look For Hidden Meanings. There are some women who might fish for compliments or manipulate for a reaction; your Aries woman is not one of them. If she wants a compliment, a date, more or less commitment, your dessert–whatever-– she’ll tell you right then and there, often loudly and bluntly and perhaps in a tantrum.  Ask her a question and you’ll get an honest answer, that’s how she rolls.

2 | Everything Does Not Happen For a Reason. Calculated decisions are not her bag, and strategy? Who has time for that when there is bold action to take? Aries women live real lives in real time and her decisions are influenced by the (often extreme) emotions she’s feeling in a specific moment. Sure, they may be rash and impulsive (why not move to Paris RIGHT NOW?), but tell her that and she’ll feel you’re raining on her parade while spitefully making her plans more concrete. When she does finally realize she might need to make a revision after her excitement/rage calms down, she will expect full support and not a peep from you, thanks.

3 | Make Plans In Advance. She loves to be spontaneous (be ready to go), but being that she’s ambitious, independent, popular and always saying “yes” to new things, she needs you to respect her booked schedule (which is often double-booked because she is too impatient and disorganized to put things into an actual calendar).

4 | Don’t Be A Pushover. Yes, she’s pushy. And bossy.  And feisty, impetuous and demanding as hell. With these traits, you might think that  she wants a “yes” man, but it’s quite the opposite: she wants someone who will hold his own with her, tell her “no” when he feels she is out of line, stand up to and for her.

5 | Adore Her, But Flattery Will Get You Nowhere. There’s a fine line between loving everything she does and saying you love everything she does. Crossing it will have her labeling you a phony in ten seconds flat. She’s one of the most genuine signs in the zodiac which means even well-intentioned insincerity makes her skin crawl.

6 | Make Her Jealous (Or Act Jealous) and You’ll Be Sorry. If she even thinks you’re flirting with someone else, be prepared for WWIII right then and there, but if you find yourself feeling insecure about her having dinner with her best guy friend, keep it to yourself or prepare for, you guessed it; WWIII. Though it’s not fair or acceptable or right, her thinking is that she knows she’s not interested in her friend and you should, too. She should give you the same leeway, but good luck with that.

7 | Don’t Be Clingy. She’s got a thing for independence and loves to wave her “I can do it” flag all over town. She loves knowing that others can’t do something without her, except her partner. She needs to know her guy is as independent as she is and even wants to look up to him a little. Just don’t be too aloof or she’ll deem you disinterested and move onto something more exciting. Who wants a cold fish?

8 | Be A Good Listener. Because she’s a great talker, especially about herself. You might get a few words in here and there, but best to keep your own statements in bullet points because she wants to go back to talking about three seconds into your story.

9 | Keep It Hot In The Bedroom. Aries women are all fire, and when it comes to sex, it’s often fast, furious and fun. But don’t expect longing and lingering glances and romantic heart-to-hearts: she likes it hot in the act and to sleep when it’s over. But when she wakes up, be prepared for an encore.

10 | Be Bold, Never Boring.  This woman loves bold gestures, exciting surprises and strong everything (wine, words, actions). Translation: She’s not the woman who will want to sit on the couch and watch television with you all day. She’ll want to be where the action is and that means she will wake up in the mood to do just about anything–skydiving, cooking class, fencing, Paris…

11 | Don’t Play Games With Her. This is a proud sign who will fight for the person she loves until the death, unless she feels she’s not being respected or appreciated. Once she deems someone not worth her time, all of that fire will turn to ice and she’ll move on quickly.

12 | Make Her Work For It–But Not Too Much. Aries is ruled by Mars, the God of War. Her entire makeup is based on fighting for and conquering things. In dating, she loves competitive dates, flirting over debates and sparring over dinners in candlelit bistro’s and exotic meals (fire and first are big with this sign). She will want to know she can’t just “have” you (nothing will turn her off faster than a smitten puppy dog) but she also won’t like waiting around feeling like you haven’t decided she’s perfect for you, either. So, let her know what you like about her without going overboard, showcase your own independence and treat her as an equal and let her “win” you. She gets a thrill out of a thrilling chase and a satisfying conquer.

13 | Be Romantic. She will likely be the one to shower you with love notes and small unexpected gifts, but she’ll appreciate bold gestures of love. Leave the teddy bears and candies in the store and surprise her with great seats at a sporting event or rent a sports car and take her away for the weekend somewhere you can both be active.

14 | Negativity Turns Her Off. Your Aries woman is as positive as she is proactive and finds negative comments, sarcasm and whining a major drag. Keep it up-beat and keep it movin’ or keep away!

15 | Appreciate Her Strength And Be Strong Yourself. This woman loves strength, power, courage, bravery, boldness and standing up for the underdog. She will fight to the death for something she loves and believes in which is why a passive or weak-minded or spirited partner will drive her out of her mind.  She loves the idea of the Bonnie and Clyde, Cleopatra and Caesar relationships and sees partnership as a romantic union between two superpowers.

16 | Challenge Her. Again, this woman loves to win–at sports, board games, intellectual debates… find ways to bring out her competitive spirit and you’ll be rewarded in spades.

17 | Get Excited About Everything She Does…Or Else. Whether she’s landed a big project, come up with a big idea or crossed the street, she needs you to let her know that A) whatever she did was awesome and B) she was the best at it. Not doing this will result in her feeling you don’t support her, and well, that’s dump-worthy.

18 | Do. Not. Tell. Her. What. To. Do. Ever. This is not a woman who wants your unsolicited advice or constructive criticism. In fact, she will take even gentle nudging as you raining on her parade or killing her dreams. That said, if she fails and falls, she will likely turn to you for support and not a single “I told you so”.

19 | Get To Know Her Friends (all 500,000 of them). This woman knows a lot of people and she loves something about each and every one of them. There is little hierarchy in her relationships and therefore every single person you meet is insanely important to her.

20 | Finally, “Get Her.” Living a life full of exclamation points can be overwhelming; all of that bossing, yelling, cheering, conquering, storming and thrilling can take a lot out of her. Worse, the world often doesn’t understand that she really only does it because she wants the very best for herself and everyone around her. Your being there to support her (and lift her spirits up when the world doesn’t) will mean more to her than anything else you could ever do. Just don’t ever tell her you know that.